A masterpiece of Italian literature 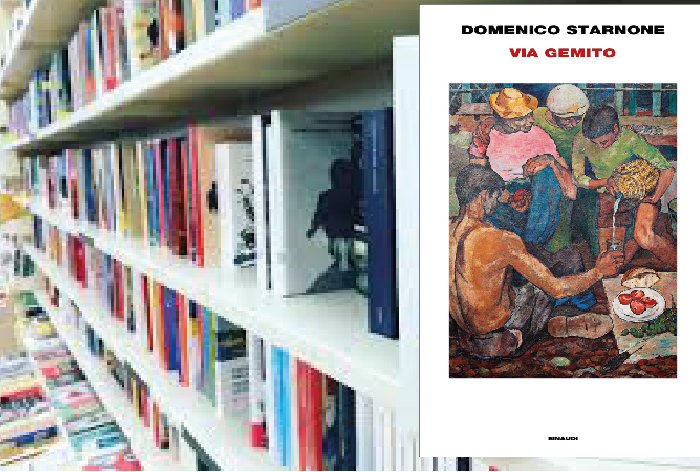 The author-character Domenico Starnone and the miracle of contemporary autofiction

The writer of “Via Gemito” traces the present day through the events of his protagonist Federì, analyzing the many difficulties of this period: «We live in times in which everything ages extraordinarily fast. One autumn is enough to wipe out a text considered epochal “

After twenty years Einaudi is back in a new edition, “Via Gemito” by Domenico Starnone and those who know (or will read) the book cannot fail to be thrilled by seeing a detail of “The drinkers” on the cover, a work by Federico Starnone. In addition to the painting, ” The drinkers” is also the title of one of the three macro-chapters, the central one, of the novel that revolves around the figure of Federì, father of the writer, a very talented artist, endowed with a vitality outside the ordinary.

The book that won the Strega prize in 2001 tells the life of Federì, an artist who fails to emerge as he feels he deserves and is thus forced to work as a railway worker. Consequently, he takes out his frustration, even violent, on relatives, on his wife, above all, on colleagues, friends and, in part, also on his children.

When “Via Gemito” came out autofiction was not a word so used (and, in other ways, abused). The first time I read it, I remember having only linked in the middle of the book that Mimi was her (don’t blame me too much, I was twenty years old). Today it seems to me that autobiographical data is an obsession for the reader.

I’ll tell you a little thing. What bothered the very first readers of “Via Gemito” the most was the entry, in the second part of the book, of the author-character who goes to Naples to review the places he is talking about. It was not something that was done much at the time, especially after a hundred pages, when the reader is inside the story.

The objection, reduced to the bone, was: if you have managed to involve the reader so far, why do you want to disturb his reading? Of course, the last thing I had in mind was to disturb the reading. I just felt that, in that specific case, the problems the author encountered in keeping biography, autobiography and invention together were themselves part of the story. The problem for me was the same as if I had written science fiction: trying to reinvent my own business in order to make a story out of it that wasn’t just about me.

The fact that rereading it twenty years later brings out different things is because it is a classic. Let me simplify: I mean that it is a book that has a lot to tell us, even if the contingencies have changed a lot. Does the author realize that one of his books becomes classic?

No. At first the goal seems to be critical and public success, as they say with a publishing formula. But you soon discover that success doesn’t prove much. We live in times when everything – even books – ages extraordinarily fast. One autumn is enough to wipe out a text considered epochal. So it’s already a miracle if a book lasts as long as your life and that of your generation’s readers.

It is nice, for example, when you happen to meet old admirers with you and discover that they remember with pleasure something you wrote forty years earlier and of which you yourself remember little. But it is also melancholy, it seems more like a commemoration. The only thing that bodes well is to discover that one of your works has found readers among the new generations. However, even in that case, in order not to be under any illusions, it is good to think about how many books have gone on for a few decades and then have not said anything to anyone.

I would gladly avoid playing the canonization game, also because it seems to me that we have not been able to stabilize even the canon of the second half of the twentieth century, let alone the possible one of these first twenty years. As soon as the authors leave the scene, it is as if their works are losing their luster. The formulas with which they were pigeonholed, the fighters who declared them winners or losers, the taste that sustained them, the literary values ​​that seemed indisputable, are wasting away.

And then we are between posthuman and postcovid, who knows what will happen. Let us resign ourselves to the idea that literature is one of the most friable terrain, that the works that will count need a long time to stabilize and that, given the great mutations taking place, it is not even said that our brain will continue to work as we are. get used to it.

Via Gemito is also a book on fatherhood. I think of how obvious it was for Federì to give birth to a child during a leave of absence in the war. And how difficult it is today to think of having children – the numbers speak for themselves. What has changed?

Luckily, everything has changed, but not enough. Federì, who grew up under fascism, feels like the male of the house. He considers it normal to churn out children regardless of contraception, just as it seems normal for him to have to support the family. The women – his wife – are mares: they are always pregnant, they take on everything, they do some illegal work. But it is a device now in crisis. Federì himself tends to contradict him, and we are not talking about his wife. They both dream of another life: no dependent work, freedom, creativity.

It will be up to the next generation to throw everything up in the air – couple, children, family, sexes – only it will stop in the middle of the ford. While the roles will reshuffle according to new perspectives in a crescendo that reaches up to today, the system will ignore it by continuing to exploit and discriminate, but in the meantime preparing technological innovations in a chain. We are at this point, in a moment in which either everything is remodeled, quickly, or things will get worse than they already seem.

Federì has a very current trait. He opens Twitter or an online magazine or a live Instagram and is full of “Federì”. Writers, intellectuals, artists who do not feel recognized. Surplus. What is different about these recognition searches? Is it just individualism or is there more?

No, individualism is of little importance. For some decades now I have seen a massive need for exceptionality. First of all, school stimulated him, then television, which led us to a discovery that is as true and important as it is obvious: no human being is without his talent, his sensitivity, his inventiveness, his creativity. , and therefore anyone has the right to prove themselves.

A mass exceptionality and a need for recognition associated with discontent have thus grown, as if the audience had begun to roar in order to be on stage. Federì, yes, it is a bit of a synthesis of this process evident today, with its fury and suffering.

For now, the process I mentioned is nourished by half culture, and half culture demands a little, a little slows down, demands but in the meantime is ashamed of its insufficiency. Federì, on the other hand, did little school and all aimed at starting wage work. His is an all-out rebellion against a social destiny that seems to him a condemnation.

He does not start from some ratification of merit – a diploma, a degree, a consenting family – but from the unjustified certainty of having a talent that no one, in the environment in which he was born, has. His vitality is the desperate vitality of those who know that he cannot go backwards but only go forward. It is the vitality of anyone today who is in a condition not of disadvantage – let’s say – artistic, but of disadvantage and that’s it.

In the book it is said that the family limits the artist. It is still so? Or is it an alibi?

It is an alibi, today more than then. And it’s a petty alibi. To avoid having to deal with our shortcomings, we take it out on others, usually the weakest.

Fdrì, parents and grandparents thus pronounce his name, then over time he loses a trait of that ferocity, takes two vowels and becomes Federì. But that need for instinct bursts into fits of anger with cascades of swear words (which she often writes attached as if they were unique sounds). Is the loss of that way of being “natural” – I put it in quotes – an inevitable process?

It’s good to put ‘natural’ in quotes. There is nothing natural in the explosion of furies and insults. As for the graphics of Federì and Fdrì, while I was writing, I saw only a slow verbal passage from a less cultivated environment to a slightly more cultivated one.

The father of Via Gemito never gets to receive from his son, who recounts his deeds, his name with the correct spelling, as if in the graphic norm, which would tame him, he could not enter in any way. It is one of the many signs of non-reconciliation. I tried to make up for it by putting on the cover a painting of my real father, who was signed by Federico Starnone and was very talented.

He talked about school and this leads me to talk about current events. Everyone agrees that schools should be open. But it has become an expression that is now meaningless. How should they remain open instead? Is distance learning only a last resort?

I believe that public schools are fundamental and face-to-face teaching is indispensable. But the cards on the table have changed to such an extent, with the pandemic, that we have all forgotten how unhappy we were with the functioning of the school before Covid. What is it in distance learning?

The old school with its shortcomings if anything worsened or experiments that instead correct defects? We will have to work on it, after Covid, as on many other things. Meanwhile, distance learning is better than the spread of contagion.

Should we hibernate until the vaccine?

It seems that even the vaccine will not rid us of the virus except in a long time. Perhaps we need to be convinced that the old way of understanding everyday life is over. But life no, and it needs to be reorganized as best as possible.